Tablets fall into the “surprise and delight” category

Mobile has been reputed as “the next big thing in digital” for several years now. Social Media marketing  swooped in and stole Mobile Marketing‘s thunder but I think the storm is still to come. Sorry, I’m not good with metaphors – I usually avoid them as my journalism teachers advised that only bad writers use metaphors.  Anyway, I’ve been reading a lot of blogs, as usual, and I’ve been to a couple of seminars recently and I came across a new term within the digital/ mobile industry. Let me take you on a journey to unveil it.

I think it’s fair to say that the online video content storm has definitely already hit, but apparently only 3% of content websites in Australia are using video to tell its stories (Dale Beaumont). We know that almost 50% of people in Australia, who own a mobile phone – now have a smartphone, which apparently is an extension of oneself. Both Mark Britt, CEO of NineMSN and Rob Borley from Boagsworld have said that the research shows that we are very emotionally connected to our mobile phone. Our smartphone is our connection to the outside world, if we forget our phone or god forbid, lose it, we feel horrible. We choose a mobile phone based on the brand and what it means to us. People are now vehemently Android of Apple users. We have started to plug our whole lives into these mobile devices, our contacts – phone and email and social, our calendar’s, our music and our photo’s (how good is it that we only need to carry one device that does it all?). And now, we can do our banking through mobile apps, we can check the weather, the stock market, the news. So I think I agree with both Mark and Rob that we are emotionally connected to our mobile phone. 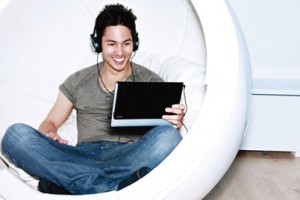 Tablets are here to surprise and delight us

But the tablet is set to change the world. Paul Fisher, the CEO of the Australia Internet Advertising Bureau, told us at the Future of Digital Advertising seminar that the uptake of the iPad in Australia has been the fastest update of any technology, ever! That’s not just in Australia, but in the world. At the end of 2011, 8.5% of the Australian population owned a tablet. It’s expected to be 33% by 2015. And the reason that the tablet (mostly the iPad) has been so hugely successful is because…. and now I finally get to the crux of it… is because the tablet falls into the category of surprise and delight. Mark Britt was the person to use this term and I love it.

Mark believes that the reason that tablets are going to change the digital landscape and bring mobile into its long awaited glory, is because of the companion experience that tablets enable. Where mobile phones are seen to be personal and an extension of oneself, the tablet seems to be a shared device and often passed around for everyone to enjoy. Like our mobile phones, we take our tablets with us, to work, to business meetings, to friends’ houses. Because of this, it has become our companion in a way that the phone hasn’t. The phone is functional and we use it for convenience and speed and for practical things we need to get done. While the tablet can also perform some of these functions, our behaviour tends to prefer to use the tablet for entertainment first and practicality second.
The way I see it, desktop computers and laptops did not provide the degree of ease and comfort that the tablet does, hence the reason that video and online entertainment viewing hasn’t reached critical mass. The tablet apparently, and here are some more buzz words, provides the user with the lean back effect. Not only can we recline and be entertained by our tablet computers, but the ability of the mobile app, be it a web application that uses the browser functionality or a native application that uses the inbuilt features of your phone or tablet. It’s these apps, and the creativity and practicality that they promote that has given rise to the surprise and delight element. The best example I can think of is Talking Ben, which is an iPad app of an animated dog, sitting in an armchair who can read a newspaper, squirm and wriggle when you use your finger to scratch his tummy and he can answer the telephone and repeat back to you what you say. We bought this app for our 2 and a half year old niece, who does like it, but it is my mother-in-law who gets the most enjoyment out of it, she literally laughs and howls with delight whenever Talking Ben repeats her Scottish accent.
I’ve not spoken of the dual consumption that mobile devices offer their owner – I think socially integrated TV programs like the ABC’s Q&A and the never ending Australian Idol have shown the power of mobile devices and how we consume multiple media at the same time. But this behaviour has been around for years now, we’ve been voting on TV shows for quite some time, it isn’t until the iPad launched that us digital marketers have had to change our mobile strategies. Because iPads are the companion device, expected by its owner to surprise and delight and because we use it while we’re watching TV or listening to the radio and we can browse the internet and search google to get more information about whatever it is that we’ve seen on TV or heard on the radio, us online marketers need to get more clever about how we plan and buy media and how we manage our integrated campaigns.
While we’ve been waiting for this mobile wave to hit we have been caught off guard by how quickly the tablet has changed user behaviour. Australians are traditionally a little slow to take up new technologies, often because of the high price of consumer electronics in our island continent but also because of things like our 2 year mobile contracts, which means we often only update our mobile phone every 2 years rather than annually like the rest of the world. And “they” say that we will see more change in the digital industry in the next 5 years than we have in the last 10. I say bring it on!
Either way, tablets are here to stay and I look forward to them surprising and delighting me further – as an online marketer and as a consumer.